🇬🇧 GG: Yesterday I suggested, that if you want to get in touch with local people (an ordinary tourist would never met), try to marry there, or plan something else unusual. We have the feeling that we are already known all over the place now. Yesterday morning , when we came to the registro civil to bring missing papers and to tell, that the rest of the missing things will be provided  the same day, we were greeted with kisses. I will tell you the day in a slow pace, so that you can reenact, how exciting this was again.

But first we had to go to the hospital for the prenuptial health test. We went there very early in the morning, of course sober, and after registering, we waited in a long row. The guy who took our blood was very friendly and made jokes when he saw that Joe was afraid of the procedure. 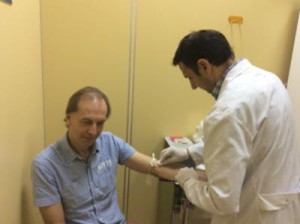 I found it interesting that in the laboratory worked only men, meanwhile in Germany this kind of job is rather made by women. They wore white lab coats. Later in the day I wondered how to recognize a doctor, because we had to find one… This is another of my observations: We rarely knew who is who. Hierarchies are for us not visible at the first sight, neither in the registro civil nor in the police station nor in the hospital. People are dressed rather very casual. The guy in the police station (at friday) even wore a really dirty fleece sweater, rather like someone who works in a car garage or in a farm. But compared to Friday, at the registro civil they were better dressed at Monday, our friend German even wore a tie yesterday. Maybe they have ¨casual Friday¨?

We were told that we should come back at 1:00 pm to fetch the results. This was very cooperative, because normally it takes 5-7 days for this. We thanked a lot and they didn´t make a big deal. Then we hurried to the registro civil for the first time. We handed the papers and were asked to wait (we didn·t get, why). We still were sober, and have had a loss of blood in the hospital. Joe´s mind stopped working.

When released, we rushed to our b&b place to have breakfast and rested a litte bit.

The next step were the testigos (witnesses), who had to present themselves at the registro civil with their passports. At noon, we drove to the car rental to pick them up, and the young woman (Luciana) was ready. She told us, that the second witness (Facundo) will come to the registro. So we were sitting at the registro civil for the second time that day. It took about half an hour and it was accomplished. We have two reliable, young, good looking and nice witnesses. It will be their very first time.

Exactly at 1:00, we were at the hospital. The sun was shining and we hoped, we will be free in half an hour, ready to explore finally the beautiful glacier of Ushuaia. But, unfortunately, the papers were not ready. After half an hour they were found, in fact , the result of the test were indicated, nameley with the words “no reaction”, but a doctor´s signature was missing. So they told us to find a doctor to sign it, and indicated us another place in town, some health institution. We were a bit desperate, and I thought, that in a hospital there should be some doctor´s – or not?? I saw some guys in white coats, but as I ddin´t know, if they are doctor´s or male nurses (and my Spanish is stil poor), I didn´t dare to address them. What now? We decided to go to the fiscalización sanitaria (we think that this is the health office), because they had to finalize the documents and we knew, that they were nice and supporting. So they were. We came shortly before they closed, and the person who had to confirm the form (a doctor? – we didn´t understand who is who and nobody explained this) was still there. But she couldn´t sign while the other doctor´s signature was missing. Jorge, a very nice clerk, helped us for the first time that day. He made some phone calls and found finally a doctor. We had to show up there at 2:00. But when we arrived at 2:00, they said the indicated doctor is gone, he will come back tomorrow. I think we pulled long faces. Oh, she said, she will find another doctor. After waiting a while, a man came, he wore a dark red suit, similiar to these green ones we know from US hospital tv series.Was this the doctor?  No, he wasn´t. After another while a rather young man with a serious face, wearing normal clothes, came to greet us. This was the doctor. I asked about the results, and he told that this is an archaic tradition in Argentina,  they check, if people have infections. I think, besides of being not up yo date, that it is not fair at al. Can people, who have infection diseases not marry in Argentina? What a discrimination (we thought that the test would maybe be about genetic diseases)!

He asked us, why we want to marry here. I said in Spanish, “porque es el fin del mundo”. I think, he didn¨t like my answer very much, bacause he said: “Es el principio del mundo”. I liked this and he is right, of course.  Everything is a matter of perspective. That is what I try t teach my students.

We thought, we are done, and rushed to the fiscalización. But – the person responsible to double check the signature of the first doctor, had left, because it was after 2:00 now and the fiscalización was closed to the public. Again Jorge helped us. He made some phone calls, then a messenger came, took the forms and after 20 minutes he came back with the forms. Thank you  so much, Jorge!

Rushing to the registro civil (for the third time that day!) It was closed. Because we are nearly mambers of the family, they let us in and took the papers. Everybody released! Yippee!!!

It was after 3:00 , and it started to rain. The glacier was in thick rain clouds. But we shouldn´t complain, with one or tow exceptions (the police), the Argentinians were really so supporting and cooperative! Thanks a lot to everybody helping us, for being flexible,  by making long ways short and being patient with us.